Welcome to the website dedicated to the life and career of one of the UK’s most acclaimed songwriters Bill Martin MBE. Bill passed away on 26th March 2020. He is survived by his wife Jan and his four children Meran, Alison, Angus and Melanie, four grandchildren and a great-granddaughter. The family will be organising a memorial and celebration of Bill’s life once the current health restrictions ease.

During his career he was awarded 5 Ivor Novellos, including one as Songwriter Of The Year.

In June 2014 Bill received his MBE in the Queen’s Birthday Honour List for Services to Music and Charity in Scotland. 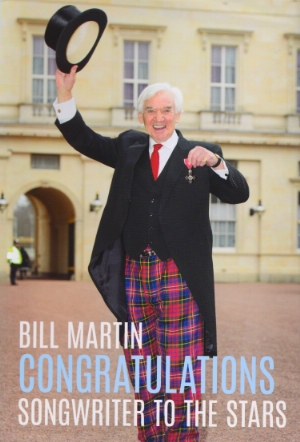 Congratulations
Songwriter To The Stars

The first print run of Bill Martin’s autobiography sold out but a limited number are available direct from Jan Martin. Contact Jan for more information.

In this book, Bill recalls his upbringing in Govan, Glasgow, going to school with a young Alex Ferguson, playing football in South Africa before finding Tin Pan Alley and writing Number One hits for Sandie Shaw, Cliff, Elvis, The Bay City Rollers and many more.
“His is a story of joy – a life set to music.” Michael Parkinson
“The music business book of the year.” Chris Evans 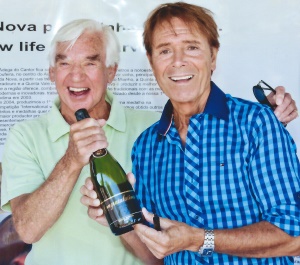 In November 2012 Bill was presented with the prestigious Living Legend award at the annual Tartan Clefs which celebrates Scotsmen and women who have made an outstanding contribution to music. Read more here.

Bill’s career was the subject of a two page feature in the Scottish Mail on Sunday. Read Bill’s views on the current music scene here

Bill Martin was the first British Songwriter to write a Eurovision Song Contest winner for the UK with “Puppet On A String”.

First British Songwriter to write a UK Number 1 football song “Back Home” by The England World Cup Squad in 1970.

First British songwriter to win the Eurovision Song Contest with his song “Puppet on a String” and as a Music Publisher with “All Kinds of Everything”.

One of the few British Songwriters to have Number 1’s in every country in the world – Europe, Russia, India, Japan, Australia, USA and Canada.

Only Scottish Songwriter to write, produce and publish the Scottish band The Bay City Rollers and to have Number 1’s in every country of the world with this group.

One of a handful of British songwriters to receive the Prestigious “Silver Heart” from The Variety Club of Great Britain for his services to Charity.

The first British Songwriter to have his own radio programme for two years interviewing stars from Dennis Law to Henry Mancini to Sir Matt Busby.

Only Scottish Songwriter to be an original member of the SODS – Society Of Distinguished Songwriters – and the only Scotsman to be elected King Sod three times.

In May 2011 Sir Jackie Stewart presented Bill with the Great Scot Lifetime Achievement Award at the Johnnie Walker Blue Label Great Scot Awards. Above he is pictured at the award ceremony at Boisdale Restaurant at Canary Wharf with Annie Lennox who received a Great Scot Award for Charity.

On the 7th February 2011 Bill was honoured to be inducted into his old school Govan High’s Inaugural Hall of Fame. In the photo above he is joined by Headmaster Iain White and Sir Alex Ferguson CBE. Sir Alex and Bill were inducted with four other old boys.

All songs on this website were written,
co-written, produced or published by
Bill Martin.